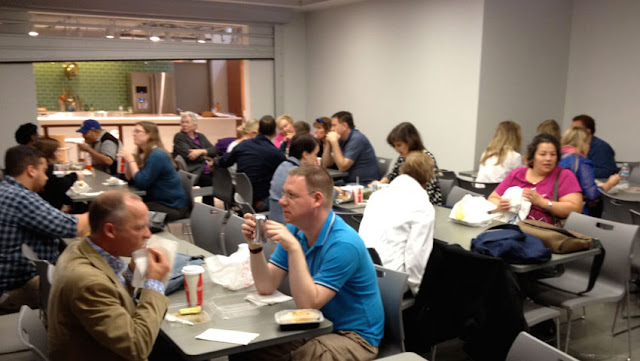 The new multi-purpose room at the Reading Terminal Market, named after semi-retired Inquirer food columnist Rick Nichols, opened while I was away in Wisconsin. Today it was nearly full for the noontime lunch crowd.

Most of the time the room will simply be another seating section at center court, but the market plans to make it available for groups via reservation, and for special events. It can also be combined with the kitchen area at La Cuchina at the Market, Anna Florio's adjacent cooking school classroom.

Later this spring the market will add to the back wall of the room an exhibit on the history of the market, created in cooperation with the Philadelphia History Museum (formerly known as the Atwater Kent).

The seating in center court environs -- recently upgraded with new chairs and tables -- temporarily expanded this winter into the area that formerly housed The Spice Terminal. When Wursthaus Schmitz begins construction of its new stall, that extra space will disappear.

This is all part of the Avenue D Project at the market, which is nearing completion. As part of that program, L. Halteman Family recently rejiggered and expanded its space, renaming part of it Riehl Deli & Cheese. Work is also progressing on the space along Avenue D for Valley Shepherd Creamery and the Tubby Olive. Another new vendor, The Head Nut, will begin work on its stall under the mezzanine soon.

The market has yet to announce a new tenant for the space created by the retirement of Coasal Cave's owner. Also up in the air is what will become of Delilah's: officially she could still return, but that appears more and more unlikely as time rolls by since the business was put into bankruptcy.