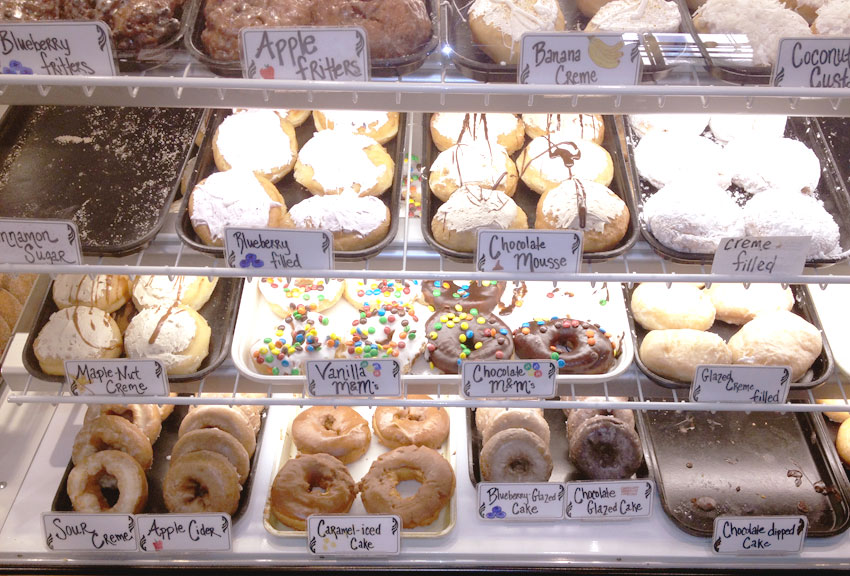 There are two camps when it comes to doughnut-lovers: those who adore raised yeast doughnuts, and those who prefer cake doughnuts.

I'm among the latter, with a taste acquired in childhood through the local "donut man" who sold either plain or powdered doughnuts, fried in lard, out of a World War II Army surplus bus. You had to eat these fresh out of the fryer, otherwise they were leaden.

While the new Bieler's Doughnuts at the Reading Terminal Market can't compete with childhood memories, its cake doughnuts (at least the plain and powder sugared varieties) make a fine pairing with coffee. And unlike the doughnuts of my youth, Bieler's says properly packed its doughnuts will stay fresh considerably longer. I'll leave the analysis of the raised doughnuts to aficionados of the yeast version.

My only complaint is the same one I have for all of Bieler's baked goods, and it's the same one I hold for all Pennsylvania Dutch baked goods: they are simply too sweet for my taste. I also find the various flavorings altogether too commercial, i.e., artificial, even when they aren't. But lots of folks do enjoy the highly sweet Amish-style baked goods, and if you count yourself among this throng, you will enjoy Bieler's donuts.

Bieler's outdoes Dunkin' Donuts and Tim Horton's when it comes to sheer variety. For each style, cake or raised, there are a plethora of frostings, fillings and flavors. I did find the fruity-filling in one I tried early on excessively runny, but a foodie friend raved about the creme filling (note the spelling is creme, not cream). Alvin Bieler said he and son Kevin, who runs the stall, are making about 40 varieties.

When they first opened more than two weeks ago, Bielers did have some issues with their fryer's temperature control. The first batch I sampled were way too greasy. Since then they've got the fryer temperature under control, and the result is a doughnut you can enjoy, if not guilt-free, at least dripping grease-free.