Lamb shoulder: a bargain cut with plenty of flavor

In the more than 10 years since this blog started I've posted at least a dozen items about lamb. Here's another, this time focusing on one of the few remaining bargain cuts: shoulder.

Most of the time I go for shoulder chops, which could be purchased this past weekend at the Reading Terminal Market for $5.49 to $8.99 a pound, about half the price you'd pay for loin or rib (rack) chops.

Martin's Quality Meats & Sausages was the low-price leader, selling lamb from Catelli Brothers, a South Jersey processor and distributor which raises lamb on its own farms in Quebec and buys lamb from producers in the western U.S., Australia and New Zealand. La Divisa Meats sold at the highest price, using meat from Jamison Farm in Latrobe, a boutique producer of Pennsylvania lamb which also supplies top restaurants, including Blue Hill. Giunta's was in the middle, at $6.99, with Colorado lamb distributed by Marcho Farms of Souderton. (Over at the new Whole Foods, shoulder chops from Iceland sell for $7.99. Because it is leaner than most other lamb, it has a milder flavor; for me, that's a negative, but others find that appealing.)

As much as I enjoy a thick loin chop or lamb "lollipops" cut from the rib, the heartiest lamb flavor can be found in the shoulder chops.

The cut is less tender, which is one of the reasons why shoulder is less expensive than loin or rib. Just as in beef steaks, the more tender cuts command a higher price. But what the shoulder lacks in relative tenderness, it more than makes up in flavor. And even though shoulder isn't as tender as the other lamb cuts, it can still be rewarding when simply grilled; it may be a bit chewier than the other cuts, but it's not too tough for the high, dry heat. 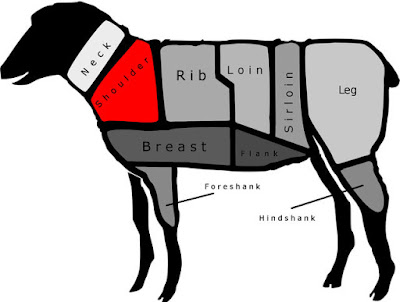 Shoulder chops come in two different cuts: arm and blade. Arm chops, as you might expect, are cut from the part of the shoulder closest to the arm, hence the round bone you'll find in this style. The blade cut comes from closer to the neck and features -- guess what -- the shoulder blade bone.

In recipes they are fairly interchangeable. Although some think the arm chop is more suitable to braising than the blade, both can be broiled, grilled or pan-fried. The arm chop will have less fat overall as well as less marbling. The blade looks like a smaller version of the beef chuck blade steak and has more marbling. No matter the cooking method, shoulder needs to be cooked to at least medium, and also holds up to longer cooking -- though if you go beyond medium well you do risk shoe leather.

If you're braising them you can go with a thick cut, but when grilling, thinner is better; I like them cut no more than three-quarters of an inch.

When I stopped by Nick Macri's La Divisa Meats he only had large pieces of shoulder, not chops, but he was more than happy to cut to order.

Before grilling I bathed them in a yogurt marinade. Although the marinade has some ability to tenderize, it won't turn the chop into a tenderloin. Instead, I use the marinade for flavor.

For the two chops (which weighed in at a total of 14 ounces, just under a pound) I mixed about four ounces of full-fat plain yogurt (not Greek) with a couple tablespoons of olive oil, four cloves of minced and mashed garlic (adding a little kosher salt while scraping the cutting board with the back of your chefs knife turns minced garlic into a mash), the zest and juice of a small lemon, and whatever spices or herbs strike my fancy. This time it was cumin and cardamom -- two tablespoons each, ground. I placed the chops in a single layer in a non-reactive baking pan, salted and peppered them, then spread the marinade on both sides of the chops. I covered and refrigerated them for six hours, though you could certainly leave them overnight or cut the time down to four hours.

I didn't bother wiping off the marinade when it was time to hit the grill, I just placed them on the hot oiled grate over a medium fire and cooked about four-to-five minutes a side for medium.

I cooked up a mess of mustard greens with garlic as my side dish. A cold lager or your favorite red completes the meal.