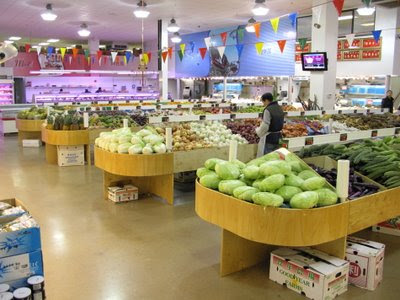 The photos only show the produce/meat/fish area of the store; an area just has big holds dry goods and refrigerator and freezer cases chock full of ingredients and prepared foods. I've never seen such a collection of steamed buns! (I brought home Flower Scallion Buns to accompany dinner tonight.)

Although I spotted some Filipino-style frozen items, and Japanese noodles, most of the stock is devoted to Chinese foodstuffs.

I refrained from purchasing protein since my larder at home is pretty full, but I will be back. Nicely meaty pork bellies were selling for less than $2/pound; you could get sliced fresh belly for just a little bit more. The range of pork parts was immense: everything from feet, snouts and ears to kidneys, hearts and blood. In the frozen section was an even wider variety of pork, beef and lamb, some of it pre-sliced: thinly sliced leg of lamb, for example, at $5.99/pound. And if you want to make cheese steaks, they've got sliced rib eye, too. 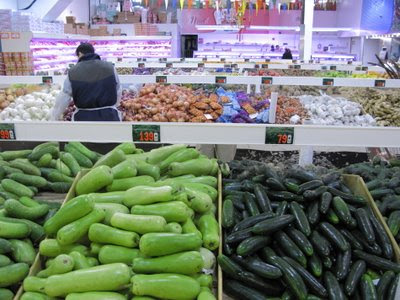 You want Portuguese sardines for the grill? They have them in the frozen section, whole and ungutted. Probably better than anything you can get "fresh" in a fish store. The long fresh fish counter didn't look bad, with the fish properly under ice. (I do wish they would remove the dead fish hanging out in the live tanks under the counter, though.) The fresh mackeral was about 50-cents cheaper per pound that at the Reading Terminal, and looked at least as fresh.

The poultry was plentiful, too, especially duck at reasonable prices. Almost as many different duck parts as pig parts: tongues, feet, gizzards, etc.

By looks alone, the most of the protein looked of decent quality; I will definitely return for taste tests.
Posted by Bob Libkind at 3:24 PM

I'm over the moon for this market. It's a heck of a lot closer to my house than the markets down on Washington Avenue, but I'd say the offerings are comparable. I'm giddy over the number and variety of Thai curry pastes they have for under a buck a can, and the produce is always looking fresh. My one complaint is that the herb section could use some labeling, I bought a few bags of what smelled like basil, but tasted completely different once I got it home. I still don't know what I bought, but it wasn't basil.

i've never been to this one but it looks a bit nicer than the one on Washington (two blocks from me).

There are two asian supermarkets on Washington, one at 11th and one at 16th. This one looks better than both, judging from your picture. However my favorite one is on 6th and Wharton. In comparison, all of the South Philly Asian Marts have many different countries represented but lean more to the Vietnamese side. I am always able to find any ingredients I need for cooking Filipino, Thai, and Chinese food too.