Things that swim were clearly favored by the judges at today's Souper Bowl contest at the Reading Terminal Market. The first, second and third place winners, from among eleven entries cooked up by market merchants, all involved creatures that like to hang out by sea or river.

The Souper Bowl was part of the market's Comfort Food Festival.

I tasted most of the soups entered, and there wasn't a clunker among them, including the two pasta fagiole entries, but I can't argue with the winners. The snapper soup, a Philadelphia classic, had its richness balanced by the traditional shot of sherry. The bisque was just about the seafood, as it should be. Although cream-based, no New Englander would have recognized the clam chowder, since it featured some unusual and intense seasonings, but thoroughly enjoyable. Other soups entered included a golden potato, sweet and sour cabbage, matzah ball, turkey chili, and Italian wedding. (That adds up to 10; can't remember the 11th). Although some merchants who don't usually prepare soup made them special for this event (like DiNic's pasta fagiole), most of the soups are regularly available. The winning snapper soup is sold by Dutch Country Meats from the stock of goods they bring in from Rieker's, a German specialty store in the Northeast; starting next week it will be made on premises from the Rieker's recipe.

I also made the rounds tasting just a few of the offerings from merchants at the Comfort Food Festival, served at tables around the market's center court. Most offered free small tastes, but were also selling larger servings. I enjoyed the chicken from Nanee's Kitchen and the German frank with Kraut from Dutch Country Meats, but there were plenty of other goodies, including waffles and ice cream from Fisher's, one of the few "sweet" comfort foods highlighted.

Here are some photos from the event (as always, click on a photo to see a larger version): 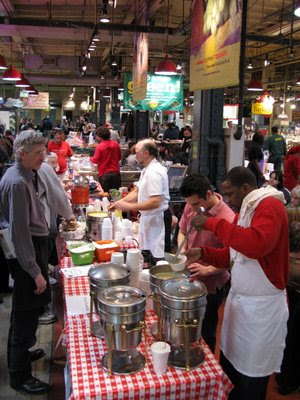 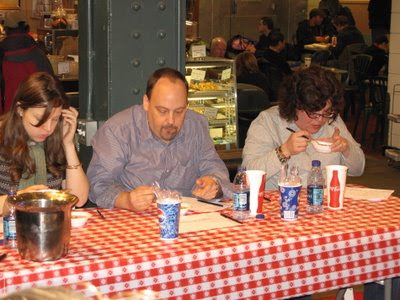 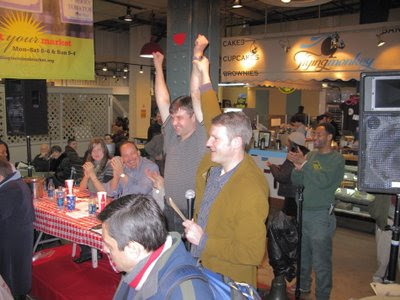