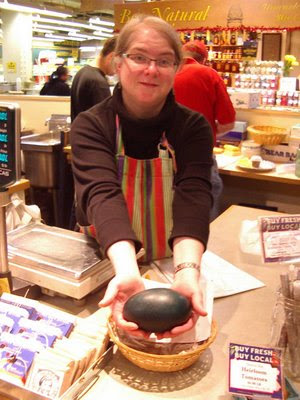 Is That an Egg
or an Avocado?

The Farmstand has gone more than a week without a freezer, which means no meats or chicken pot pies. The freezer has been repaired, but now a problem has been discovered in the electrical supply. The dairy refrigerator case is just fine.

Earl Livengood returned to the market today, offering root vegetables, winter squash, potatoes and dried herbs. But planning for summer is well underway: Earl said son Dwayne was spending the day planting tomato seeds so seedlings can be grown then placed in the ground this spring.

Lots more variety of sausages at Dutch Country Meats, all from Rieker's: fresh bratwursts, smoked Hungarian brats, Bavarian brats, kielbasa, weisswurst, knockwurst, München weisswurst, coarse mettwurst, fine mettwurst, calve's liverwurst, and German-style wieners, all $5.99/pound. They also had landjaeger at $1.79 a stick and rauchbeischen (smoked bit) sausage at $6.29/pound. Not much selection in the baked goods from Haegele's; the few hot cross buns I saw at 8:30 a.m. were gone by the time I left the market two hours later.

Jim Iovine of Iovine Brothers Produce enjoyed a New Year's trip to Italy last month, including a visit to a namesake winery in the shadow of Vesuvius. He also learned that in Italy, his name is pronounced YO-vin-EE. Just like how he'd shout out to his brother Vincent: "Yo, Vinny!"

The market has also ordered 5,000 cloth bags for distribution to customers as part of its Green efforts. RTM management and the merchants' association are trying to figure out the best way to get them to customers who will use them instead of just tossing them in a closet. One wag suggested exchanging them for the Whole Food cloth bags some RTM shoppers carry.
Posted by Bob Libkind at 12:49 PM