The 800-Pound Gorilla of Farmers' Markets 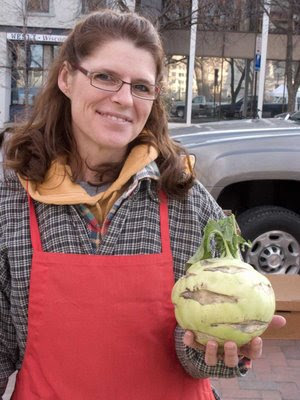 What's undoubtedly one of the nation's premier pure farmers' market opened for its 38th season today around the state capitol building in Madison, Wisconsin.

The Dane County Farmers' Market on the Square limits vendors to producers of Wisconsin food and horticultural products. No arts, no crafts. No food carts. (All those vendors must be located across the street and get their permits directly from the city and are not part of the market, though they benefit from the thousands who visit every Saturday from mid-April through early Novenber.)

As one would expect, the pickings were slim so early in the season, for in Wisconsin spring arrives a couple of weeks later than it does in Lancaster County or South Jersey. Still, one could amply supply the larder from provisions available today.

Root vegetables from storage or the ground were plentiful. Like the giant kohlrabi displayed here by Diane Westra of Mammoth Produce of Randolph, Wisconsin. Smaller, less woody though by no means diminutive samples were also for sale by Diane and her husband Ed, along with some great looking small cabbages. The Westras concentrate on brassicas throughout the year, including broccoli and cauliflower. They also do eggplants and peppers in seson. And no, they didn't name their farm for the size of their vegetables. In 1989 they uncovered woolly mammoth bones while digging an irrigation pond. 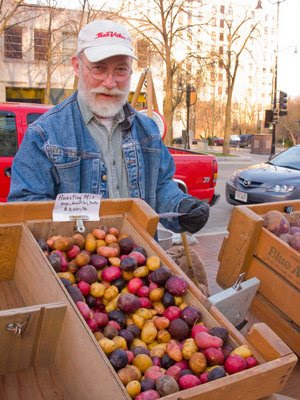 Potatoes were much in evidence, and no where more so than at Butter Mountain Farm where John Aue was selling about half a dozen varieties for $1.50-$3.00 a pound. John became entranced with potato cultivars in graduate school. He's been selling potatoes and only potatoes from his Richland Center farm at the market since 1993.

Harmony Valley Farms of Viroqua featured other root vegetables at its colorful stand. Today, among other items, you could purchase two varieties of Jerusalem artichokes, red cipolline onions, shallots, horseradish, beautifully firm black radishes, and parsnips. They also featured pristine bunches of ramps for $3 apiece, or three for $8. (At least one other stand had wild garlic.). Harmony Valley is no small enterprise, with a staff of 10-30 workers supplying 800 shares in its CSA. They raise 60 varieties of fruits and vegetables on the farm's 100 acres, and also sell Angus beef in partnership with a neighbor.

Winter and eary spring greens accented by spinach could be found at a number of stands, including "frost-sweetened spinach" at Snug Haven.

Popcorn populated Krinke's stall. The Reeseville farm featured Calico, Black, White Hullless, Yellow Hybrid, Baby Rice and Red Baby Rice kernels in packages, and also sold some by the cob. To accompany the popcorn you cook one of their rabbits or poultry. (The duck was $2.89/pound). Krinke's has been selling at the market for 31 years.

Sorrel and French breakfast radishes were available at Jen Ehr Family Farm's stand. The sorrel was $3/bunch, the radishes $2.50. The Sun Prairie farm sells a full range of fruit, vegetables, herbs and poultry in season.

Plenty of plant vendors, bakers, mushroom growers, maple syrup harvesters, beekeepers and, since this is Wisconsin, cheesemakers sold their goods, though only about two-thirds of the available slots were filled so early in the season. (There's a three-year waiting list for vendors to earn a space at the market.)

I was particularly intrigued by the many varieties of coleus offered by Domann's Plants of Beaver Dam, a greenhouse operation specializing in bedding plants and herbs. One of the many cheese vendors was offering samples of a baked cubed cheese fresh from the warming plate. They also bragged about having the "squeekiest" cheese curds at the market, cheese curds being to Wisconsin what pretzels are to Pennsylvania. Cow, sheep and goat cheeses were in abundance at more than half a dozen dairy stands, though I didn't spy any raw milk.

Although this was the first outdoor market of the season, the Dane County Farmers' Market operates year-round indoors at Monona Terrace in early winter and from January until mid-April at a local senior center. On one Saturday in mid-summer, when an art fair occupies the capitol square, they move the market to an outdoor facility near Monona Terrace, a convention complex designed by Frank Lloyd Wright.

A few more of photos from today's visit can be found at my Dane County Farmers' Market Photo Gallery.
Posted by Bob Libkind at 5:22 PM