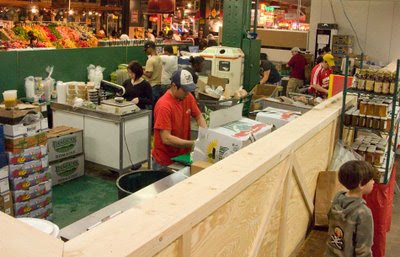 The prep areas at Iovine Brothers Produce has been consolidated at the Reading Terminal Market. Jimmy and Vinnie Iovine moved their small office out by the freight elevator, tore down walls and actually created a bit more shelf space for their bag specials in the process. It's reassuring to customers to see all the prep before their eyes.

The big bargain this week at Iovine's was the peppers. Organic suntan peppers were two pounds for a buck, while red bell peppers were a buck a pound. But the biggest bargain to me were the frying peppers: three pounds for a buck. I bought 95-cents worth and roasted them in the oven in some olive oil. I've since been eating them in pasta and atop pizza. Tonight I'll sauté some onions and garlic, add the peppers and top hot dogs with the veggies.

Earl Livengood was back at the Reading Terminal Market Saturday, with a much wider array of products for sale than I would expect this early in the spring. And next week, Earl whispers, he might even have a small quantity of asparagus!

Saturday he offered four varieties of potato, spinach, turnips with tiny tubers and beautiful greens, dandelion greens, and another green which even Earl couldn't identify; he said he found it growing in his lettuce patch, and it tasted good. Pussywillows were also available.

Is It Summer Yet?

You might have thought so looking at John Yi's fish case, for there amid the regular denizens were soft shell crabs, at a pricey $5.99 apiece. The shad roe sets were $6.99.

With $168,000 of its $215,000 goal funded, the Fair Food Farmstand is forging ahead on plans to move to the former Rick's Steaks space along the RTM's 12th Street side. To fill the funding gap the Farmstand will hold an after-hours party at the market on May 7, featuring a couple of bands as well as some of the Farmstand's farmers. Admission will be $20, but they'll welcome additional donations.

Sarah Cain co-manager of the Farmstand, has a sideline thanks to her recipe for Vrapple, an oink-less "scrapple" of her own invention. Since the Vrapple won second place at the market's Scrapplefest competition a few weeks ago, orders have jumped considerably, says Sarah.
Posted by Bob Libkind at 10:25 AM