All four of the dedicated produce vendors at the Reading Terminal Market featured asparagus today. Earl Livengood was selling his Lancaster County bunches for $4.25, while Iovine Brothers offered South Jersey’s best for $3.99. I didn’t catch the price at Fair Food’s Farmstand. Over at OK Lee’s, no local spears were available, but what appeared to be California bunches were selling for 99 cents.

At Fair Foods another featured items were hop shoots — yes, the same plant from which beer gets a good part of its flavor and aroma. There weren’t many takers, however, since a small bunch that might serve two with very small portions was selling for $8. Too dear for me. It is said they have an asparagus-like flavor and are ideal served in an au gratin with bechamel sauce. But I’ll never know, at least at that price.

I did invest in some cream cheese from from Hail’s Family Farm near Wyalusing, Pennsylvania. At $6 for eight ounces, Hail’s is expensive compared to deli or supermarket bricks, but since it’s the only cream cheese I know without vegetable gum (not necessarily a bad ingredient) but I thought I’d try it on my salt bagel with belly lox from Herschel’s tomorrow morning. 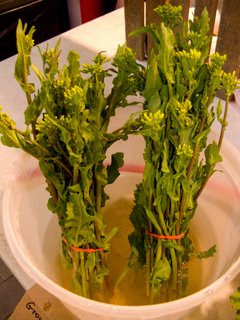 Livengood’s also featured rhubarb ($3.95/pound) as well as this green, which turns out to be flowering turnip greens. Earl said an Asian lady who works for him urged him to sell what she regarded as a delicacy. It looks a lot like broccoli rabe (another member of the brassica family), so that’s what Earl’s sign calls it, though he’s the one who told me it’s flowering turnip greens. He also still had lovely small white turnips with pristine greens, as well as spinach, a variety of potatoes, and pussywillow stalks.

Speaking of broccoli rabe, Tommy DiNic’s had a surprise visitor late Thursday afternoon: Bobby Flay. He ordered a pork with provolone and greens, of course.

Back at Iovine’s, although the citrus season is waning there was still a nice selection, including juice oranges at 6/$1, medium navels 4/$1, and cara cara navels two for $1.49. Champagne mangoes were $1 apiece, more common mangoes two for a buck. Jimmy Iovine was ecstatic about the smoked garlic he had this week, but none was available this morning. He plans on getting some more.

Ramps remain $3.99/bunch, but Iovine’s now has fiddleheads, though they were sourced from the western U.S., and Jim thinks the Eastern ones are better. Spring garlic and onions were in evidence, too, along with flowering chives. (Even the chives in my backyard pot, overwintered, are starting to flower, and the peppermint pot is getting fuller daily.)

If you can’t wait for local strawberries, Iovine was selling two one-pound clamshels from California for $3; one-pound California clamshels of berries were selling for 99-cents at OK Lee, but they didn’t look quite as ripe. Green pepers at Iovines were 99-cents, as were frying peppers, but the colored varieties were $1.99.. Grape roma tomatoes were $1/pint, salsify $3.99/pound, tumeric roots $2.99.

Over in the fish aisles, Golden added an item I hadn’t seen before: conch meat, selling for $9.99/pound. They also had a soft shell crab special, four for $20.