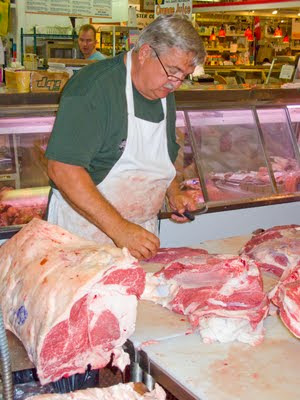 I asked Joe and fellow butcher Ben Ambrosini if they could cut me a nice rib steak from the prize steer, but they said Martin had already taken that cut home for his own consumption. When I mentioned that to Charles Giunta of Giunta’s Prime Shop, he said he’d have to call his brother and get invited to dinner.

Martin’s also displayed some very meaty pork belly today — identified as Fresh Pork Bacon, City Dressed — for $2.99, pricier than I’d pay at one of the Asian supermarkets, but considerably meatier. Lamb ribs (breast) were $3.29, leg on the bone $4.59.