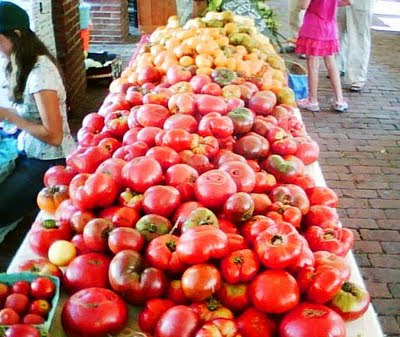 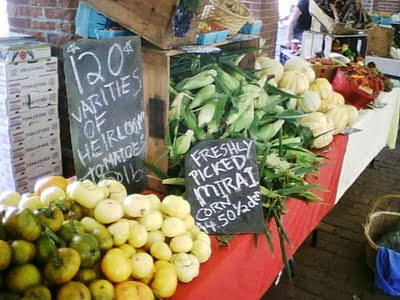 One of the oddities I’ve noticed in shopping at farmers’ markets (and the Reading Terminal Market) is that although the produce season is going great guns, patronage is down. While the RTM can lure in the tourist traffic that increases this time of year, traffic seems slower at Headhouse Square. Obviously, a lot of city dwellers take their two or three weeks of vacation in August, so it’s natural for headcounts to be reduced, and I suspect when the weather turns frightful (90-degrees, high-humidity), that also cuts down on the casual shopper.

Rain also plays havoc with traffic at farmers’ markets. Just ask Tom Coulton, who drove to Headhouse with 900 pounds of tomatoes a week ago. But with heavy rains he decided not even to unload and head back home to can the tomatoes. There just wouldn’t be enough buyers, he concluded.

Tom didn’t turn around today, as you can see from the photos at the top of this entry. Tom’s chal slate proclaims he’s got 120 varieties of heirloom tomatoes, and it just have had at least 15 or them there today. He’s also got Mirai corn, which I reported earlier would be impossible to find unless you made a trip out to Pete’s Produce. Tom’s been growing it for three years and he planted his crop so that he’ll have it for at least another two weeks. This sweet, tender Japanese hybrid is worth seeking out. Tom was selling his ears for 75 cents apiece. I walked away with four ears and a half pint of red cherry tomatoes (3/4 inch diameter: small!) for $7.

Beechwood Orchards, in addition to offering a profusion of plums, peaches, nectarines, berries, tomatoes and early apples, had the season’s first local grapes available today. The red-ish seedless variety (Dave couldn’t say what they were) were firm with a nice bite balanced by just enough sugar. I limited myself to a half-pint of what may be the last blueberries of the season for tomorrow morning’s yogurt ($2.50). Beechwood’s blackberry prices were particularly dear, $4 for a half-pint, vs. $5 for a full pint at Three Springs Fruit Farm. (As noted in previous post, they were $4/pint at Livengood’s at the RTM Saturday.)