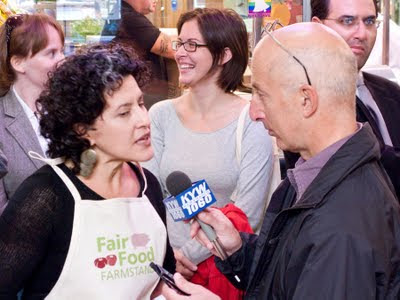 Fans of the Fair Food Farmstand crowded the aisles for today's grand opening of the non-profit group's new venue within the Reading Terminal Market.

Marion Nestle, a professor at New York University and leading activitist for good food and good nutrition (she's the go-to source for reporters covering the subject) was the keynote speaker, as she was earlier this morning at the annual conference of Les Dames de L'Escoffier. In her brief remarks Nestle linked the revitalization of small farms with the health of American democracy, and praised the symbolic importance of Michelle Obama's support of a farmers' market near the White House.

The U.S. Department or Agriculture, which funded a grant to get the renovated Fair Food Farmstand rolling, sent James Barham, an economist with the department's Agricultural Marketing Service. Though agro-industry remains the primary focus of the department, small farmers are getting increased attention. Barham discussed how the department's promotion of "value chain collaboration" is working to develop relationships between food buyers (stores, distributors and institutions) and small-to-medium-sized farms. 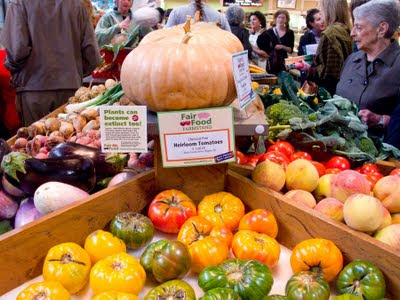 Although she didn't speak at the ceremony or sit with the assembled dignataries, a key presence at the event was Judy Wicks, founder of White Dog Cafe and the White Dog Cafe Foundation. It was under the sponsorship of the foundation that Fair Food got its start. Recently Fair Food was spun off as an independent, free-standing non-profit.

Some of the biggest cheers at the event were reserved for the farmers who attended the ceremony.

Mike Holahan, president of the Reading Terminal Market Merchants Association and proprietor of the Pennsylvania General Store, brought a bit of pointed humor to the proceedings in his brief remarks. Mike observed that when market merchants gather to discuss a new vendor, and question why the market needs a particular store, such as a non-profit vendor of local produce, you can be sure of its success.

The local locavore establishment was much in evidence. In addition to many of its loyal customers, attendees included staff and volunteers from both The Food Trust and Farm To City, which both operate farmers' markets in the region, and The Common Market, a non-profit wholesale operation trying to build markets for the area's small farmers.

Although the Farmstand is the most visible of Fair Food's progams, it's hardly the only one. Among its other activities:

This photo links parts of my life... Many many years ago, Mark and I lived across the hall from Steve Tawa at 17th & Spruce. More recently, I worked with Ann Karlen on Fair Food projects and at the Farmstand. Love this event and picture in so many ways!!