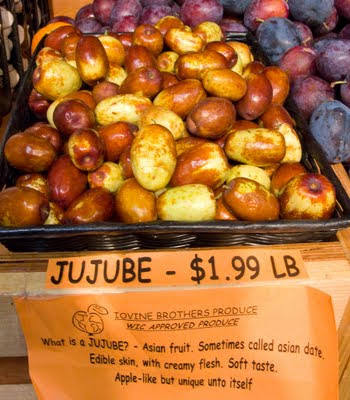 When I think of Jujubes, I think of the tiny gummy candies from Heide's I would buy during my pre-adolescent years at the Saturday matinees at the Elmora Theater in Elizabeth, New Jersey, where I saw such classics as "X the Unknown" and "The Blob".

Little did I know there was another Jujube, which I found recently at Iovine Brothers' Produce at the Reading Termninal Market (photo top right). Unlike the sweet, sugary little pellets of my childhood, these Jujubes are alleged to have medicinal properties, as well as a more adult taste. They somewhat resemble dates and, indeed, are sometimes called Red Dates or Chinese Dates, though their origin is probably India. They have a wonderful scientific name: Ziziphus zizyphus. For those interested here's the Wikipedia entry. 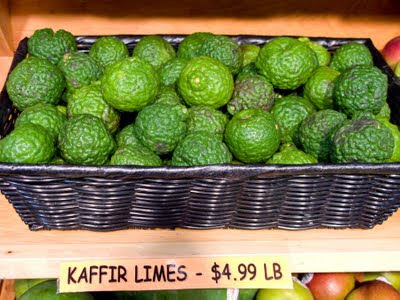 The kaffir limes (photo at right) are also purportedly medicinal and are primarily used in Southeast Asian and Indonesian cuisines, frequently in a curry paste. They are also available at Iovine's.

With the coming of winter (it sure seems close with our recent weather) Iovine's is bringing in more citrus fruit. This past week Valencia oranges were available in bags at a bargain price of $1.99 for a four-pound bag. Tangerines were six for a buck, and Florida navels were five for $2. Cara Cara oranges were 3 for $1. Limes were a bit less pricey today, 5 for a buck. Lemons were 3/$1, but they were heavy with juice. After a hiatus of a week or so, red and green cactus pears are back in stock.

Figs remain available, at least those from California. A pint box of about a dozen brown figs was selling for $4.99 at Iovines. Chile, which dominates the out-of-season fruit market in Philadelphia, is expanding into avocados to compete with Mexico. Iovines was selling medium sized fruits this week, 2 for $1.49; smaller ones were in a separate bin for a quarter apiece.

For as long as I've been shopping there Iovines has sold tofu, but only the medium firm type they package into plastic containers in water. This week they expanded tofu offerings to include three or four additional firm and super firm versions, including a "tofu cutlet" ready for cooking. You can find them in the refrigerated cases by the Filbert Street checkout. 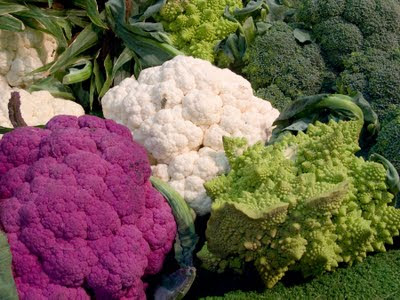 Unpasteurized cider is back in stock at Kauffman's Lancaster County Produce, available in pints and half-gallons. (In the past Ben Kauffman has also sold it in quarts; maybe he'll have those next week).

Kauffman's always has a nice selection of brassicas each fall, and this year is no exception, as demonstrated by the purple and white cauliflower, romanesco and broccoli in the photo at left.

One of the joys of Lancaster County in the fall is the appearance of local celery. Livingood's had them at the RTM this morning, $2 a bunch. The celery grown in Lancaster County is a tad less stalky and more leafy, but it's crispy freshness (versus the trans-continental California product) and deep green color make it welcome. I'll put some stalks on an old-fashioned relish tray, with a selection of olives, at dinner tonight. (Drat! I forgort to buy some fresh radishes to complete that tray.)

If we're lucky when we get closer to Thanksgiving we might see some white celery, which is the same thing as green celery except that the stalks are buried so they aren't exposed to light; the process is the same that produces white asparagus. This labor-intensive celery makes a wonderful side when braised in butter with a little white wine
Posted by Bob Libkind at 3:39 PM