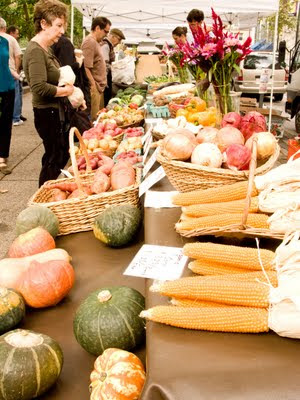 The Rittenhouse Square Farmers' Market, operated by Farm to City, is busting at its seams. The nearly 20 vendors I counted yesterday pretty much filled the north side of the square between 18th and West Rittenhouse.

To accommodate more stalls, Farm to City founder and director Bob Pierson has obtained the city's permission to expand the market along 18th Street, according to one of the vendors.

Although a couple of the stalls yesterday were promotional in nature (Zipcar, Otolith seafood CSA), most were selling the best of autumn's produce, dairy products and baked goods. Among them: