Signs of spring at the Reading Terminal Market this past week: local spinach, fiddlehead ferns, and carp and yellow pike for gefilte fish.

The spinach could be obtained from any one of the market's produce vendors: Iovine's, Fair Food, Kauffman's. OK Lee, and L. Halteman. I didn't check, but farmer Steve Bowes might have had some at his day stall in the piano court. Most were priced at about $2 a bunch. With few exceptions, the spinach didn't look super attractive for a raw salad (that's usually true for overwintered spinach), but they were all perfect for sautés or any other cooking method you choose. Many folks prefer the taste of overwintered spinach to the new crop that will appear later in the spring. Butch Dougherty of Iovine's Produce said they were great cooked and used to top a sandwich.

The Japanese painted fern in a planter in my backyard patio sprouted up with a vengeance this week, and the same is happening along the streamsides of Chester, Delaware and Bucks County (heck, probably along tributaries of the Wissahickon in Fairmount Park, too). That means commercial foragers are bringing their fiddlehead fern finds to local restaurants and specialty produce vendors. Fair Food had some rather pristine samples this week (pictured above). Frequently when you find fiddleheads in stores, they'll have some brownish, papery edges to them which is easily enough cleaned off. These, however, had none of the brown tinges. You can pretty much use them wherever you'd use asparagus, and cook them the same way. As an accompaniment to protein, I think they work better with fish and poultry than beef or lamb. And they excel as a stir-fry veg in Chinese cooking. Just don't go overboard on your consumption, and cook them thoroughly: Fiddleheads contain low levels of toxins which can cause nausea and diarrhea. Sustained heat usually kills any toxin (health authorities recommend boiling or steaming for 10-15 minutes). I usually do a light steaming or par-boiling before sautéeing and have yet to experience any symptoms. 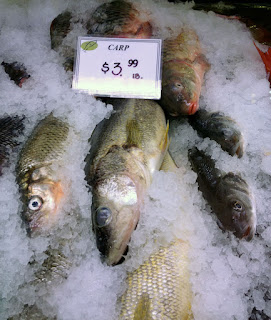 John Yi featured carp and yellow pike in its dislplay case this week, priced at $3.99 and $7.99/pound, respectively. Either or both fish are the traditional base of gefilte fish, a traditional but non-Biblically mandated first course for the Passover seder. I could not find, however, a live carp to place in the bathtub, as was traditional in olden days to assure a fresh fish for the holiday table.

Iovine's continues to stock ramps. They looked a bit better today than last week, but they'll continue to be dear at $1.99 a bunch, which makes for maybe one serving.

Two items I've enjoyed all winter long from Iovine's have now disappeared: fresh chick poeas and temple oranges. There are still plenty of other orange varieties available, but the peak season is starting to fade, even though they're available pretty much year round.
Posted by Bob Libkind at 2:45 PM