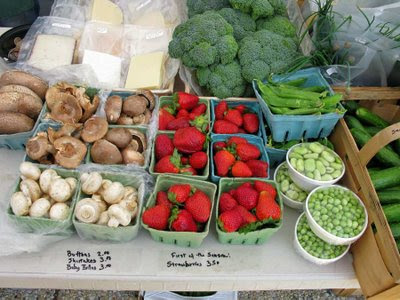 The sign says it all: first berries of the season. Highland Orchards Farm proudly displayed these gargantuan strawberries at the first day of the Aviator Park market, not just of the season, but ever.

The Food Trust established the new market at the urging of the Logan Square Neighborhood Association. The market, located on 20th street across from the Franklin Institute and Moore College, runs Wednesdays from 3 to 7 p.m. 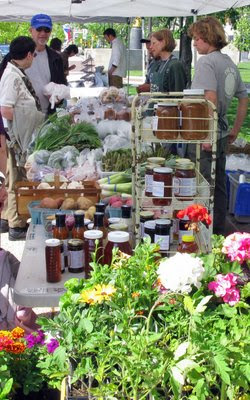 Highland Orchard offered a much larger variety of fresh produce than anyone has a right to expect the first week of May. That's due to the Wilmington farm's use of greenhouses, though the berries, rhubarb, asparagus, and some of the broccoli were harvested from plants in the ground. Highland Orchard's Ruth Linton said some of the produce from the greenhouse (like the various legumes and Persian cucumbers) are grown in hanging baskets, while other crops (fennel, beets) are in planting boxes.

Among the other produce items on sale Wednesday: English peas (both in the pod and shelled), fava beans, salad greens, cabbages, baby bok choys, carrots, potatoes, leeks, scallions, onions, flowering chives, parsley and other herbs. Linton also sells mushrooms, meat, chicken and cheese from other area producers, and baked goods from her mom.

Highland also appears at a few other area markets, including Fitler Square.

The only other vendor at Aviator Park this week was Betty's Tasty Buttons. Fudge isn't exactly produce, but She Who Must Be Obeyed says it's one of the basic food groups, just like pizza and beer.

From Highland I bought the strawberries and a bag of Ruth's mother's donuts.

The donuts were in the soft-cake style (alas, not fried in lard, which gives a great crispy finish), with plenty of apple flavor and even a few bits of apple, presumably from chunky apple sauce. Just a light touch of cinnamon in the exterior sprinkling of sugar.

The berries were big and fire-engine red (if any fire engines were still painted red these days). Although the early season berries lacked the intensity we'll see in a few weeks, they were fresh-tasting and, the next morning, considerably brightened my bowl of puffed wheat. They were even better dipped in Betty's fudge sauce.
Posted by Bob Libkind at 10:40 AM