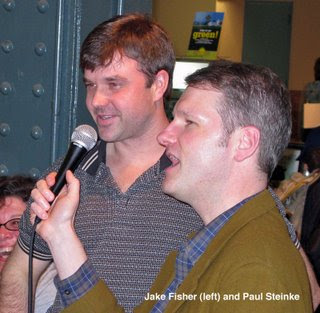 Dutch Country Meats is throwing in the towel at the Reading Terminal Market. A combination of poor volume, management issues and personal concerns has caused proprietor Jake Fisher to shut down his operation after this Saturday. Jake took over the business from prior owners about a year ago.

Jake has tried to make a go of it, bringing in German wurstgescheft specialties from Rieker's of Oxford Avenue (including the snapper soup which won him a market-wide competition this winter, hence the photo with Paul Steinke, RTM gemeral manager). He also had featured selected baked goods from Haegele's Bakery of Mayfair/Tacony until another RTM purveyor complained. So, for the time being at least, to obtain those goodies you'll have to make the trip to one of the Northeast's great neighborhoods.

It's too early to figure out who will replace Dutch Country Meats or how long the space will be vacant. Although Steinke will make another effort to lure Rieker's to open under their own name, they've shunned the opportunity in the past. He doesn't have unrealistic expectations that they will jump at the chance now.

Another possibility is that the market just can't support another butcher. With Harry Ochs, Martin's, Giunta's and L. Halteman all doing well, there simply may not have been enough business to go around.

The space Fisher is vacating has been problematic at least since the rehabilitation of the RTM in the mid-1980s as part of the convention center project. It was briefly occupied by Moyer's Pork Products following the reconstruction until Bob Moyers and his family decided to concentrate on their processing, catering and retail business in their home village of Blooming Glen. (I miss those deeply-flavored, home-smoked, no-water added hams; a road trip is in order, especially since Bob now has a BBQ tent in front of the store!) After Moyers departed Charles Giunta held down the stall selling pigmeat for a while before trying the wholesale business as a sales rep; he's been doing much better since he reentered retailing with his wide range of meats across from Iovine Brothers' Produce. Jake's predecessor owner of Dutch Country Meats also gave up the ghost after a few years concentrating on pork products; they added German-style cold cuts after Siegfried's closed in the space that is now the Little Thai Market.

The Fair Food Farmstand, which sells much of the same produce from the same farms as many of the farmers' markets around town, is bursting at the seams. They'll be expanding their retail space by building out to the next column in the Arch Street side seating area. They've already increased their cold storage ability, including a new walk-in refrigerator with 50 percent more capacity to hold goods before bringing them out to the retail floor.

One large stall that should be filled sometime this summer (one hopes) is the former Margerum's / Natural Connection. Jonathan's Best has placed signs on the space saying they'll be coming soon. Translation: they'll sign a lease and begin refurbishing the space as soon as their financing comes through. The upscale grocer has been in business in Chestnut Hill for a couple of decades.

The market has concluded all lease renewal negotiations except with the Amish merchants. Steinke said the market is committed to allowing them to maintain their current market hours and product lines. At least a couple of the Amish merchants still don't like the idea that other merchants can be open on Sunday, even though they are not required to do so. The Amish vendors are there Wednesday-Saturday, closing at 3 p.m. Wednesdays and 5 p.m. on the other days. Steinke said Sundays have not been a stumbling block. The Amish merchants, he acknowledged, are one of the market's special attractions, "so we're trying to preserve the status quo". Steinke won't get into details on the remaining issues, but believes the leases will be concluded soon. Because of the special issues involved with the Amish vendors Steinke said he left negotiations with that group for last.

The Pennsylvania Dutch Festival is scheduled for August 7-9. Last year the Amish merchants shut it down over the Rick's Steaks brouhaha. It's doubtful market management would have scheduled the event if they thought the Amish would repeat their boycott.

The Ice Cream Festival is scheduled for Saturday, July 12.
Posted by Bob Libkind at 3:27 PM

I must say, I love your blog. Re the closure of Dutch Country Meats -- we liked the previous stand a lot, however the current stand which is shutting down did not appear to live up to the quality. I agree that perhaps there are already enough meat and poultry stands without them.