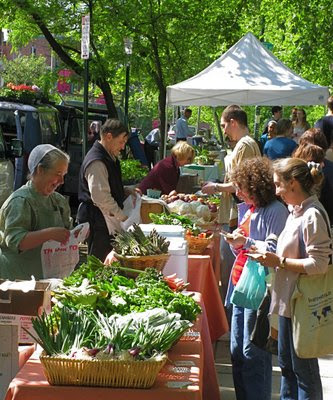 With more than half a dozen vendors selling fresh produce this early in the season, Clark Park Market in University City/West Philadelphia offers plenty of choice. I stopped by at opening at this year-round farmers' market sponsored by The Food Trust for the first time and was impressed by the quality. Flower vendors and bakers supplemented the produce stalls, and expect more farmers to sell their goods as the season progresses.

Two vendors today offered strawberries though one, Landisdale Farm (Jonestown, Lebanon County, photo at right), was basically sold out by the official 10 a.m opening (get there early). Both Landisdale's and Fahnestock Fruit Farm's berries were fairly tasty and sweet for early season berries, priced at $3.50 and $4.25 a pint, respectively; the berries from Fahnestock (Lititz, Lancaster County) were bigger (ideal for topping a shortcake), but both were tasty.

As demonstrated in the photo immediately below, most of Fahnestock's stock today, however, was devoted to tunnel tomatoes, $2.50/pound iirc. Landisdale's tables groaned under a wider variety of spring vegetables. 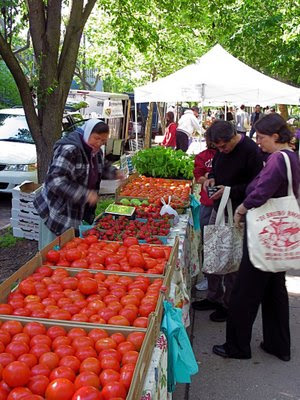 Other produce vendors at Clark Park today: Pennypack Farm of Horsham, with vegetables and greens; University City High School, with spring root veggies, herbs and flowers (photo below); Margerum's with spring veggies, herbs (fresh and dried), and dried beans and fruits, among other products; Keystone Farm, from way up north in Rome, Bradford County, selling not only veggies, but eggs, beef, pork and lamb, and cheese from the nearby LeRaysville plant; and Eden Garden of Dillsbury, York County, selling greens. 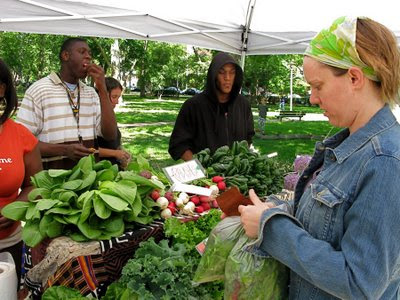 I was a little surprised to see snow peas, which seemed at least a couple weeks early at the Fair food Farmstand at the RTM this morning. They looked great, priced at $4.50/pint, and hail from Green Meadow Farm in Gap, Lancaster County.

Both Fair Food and Kauffman's Lancaster County Produce are selling local berries, priced at $5, give or take a nickel, per pint. Although they were picked an overnight truck ride away, the South Carolina berries at Iovine Brothers Produce represent good value at $1.99 pint and looked tasty; they're the best bet if you need to induce berry intoxication in a big crowd. Iovine's also scored some less expensive avocados, for $1 apiece, and good looking string beans at 99-cents/pound. 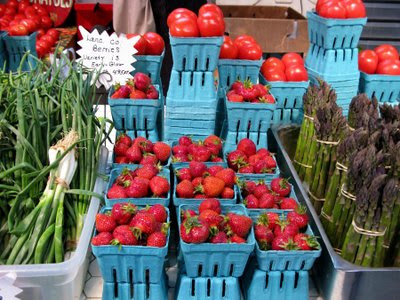 Kauffman's scallions, berries and asparagus
Posted by Bob Libkind at 11:28 AM

The farmers are watching. You can't get away with any mistakes. I'm from Fahnestock Fruit Farm and wanted to let you know the price we sold berries for was 3.50 a pint. I suspect you might have switched prices between te differant vendors. Also check out Rittenhouse Farmers market on the square, saturdays, 10-3:00. We have 7 vendors now and will be up to 10 at least soon. Thanks

Price is wrong on Fahnestock's berries should be 3.50 a pint

just noticed its not posting till you approve sorry for repitition