Each year, on the Saturday nearest Bastille Day, rowdy Fairmount residents gather in the street in front of Eastern State Penteniary's gate, demanding that Marie Antoinette be put to the guillotine. But before she is sliced and diced, Marie (played by London Grill co-owner Terry McNally) advises the rabble to eat cake, then promptly attacks them from the parapet by tossing Twinkies.

René Mondon would rather they eat bread.

The Collingswood baker is one of four merchants who opened the farmers' market at Fairmount and 22nd Street Thursday afternoon, directly across 22nd street from the historic prison. Mondon offers a selection of breads and pastries. Although I love the baguettes from Metropolitan and Le Bus, Mondon's are truer to the bread brought home every day in France: it's a tad denser and chewier, not as light an airy as the boutique breads. Which means it's bread for eating, not for display, and very versatile, since it's as good to eat for a sandwich or grilled over charcoal with garlic as it is to slather with sweet butter and jam. The bear claws, apple turnovers and danish pastries are fine, but what I really enjoy are the parmentiers, vaguely pretzel-shaped, light, sugary pastries that are an excellent accompaniment to Gallic coffee.

Mondon formerly based his wholesale bakery in Pennsauken, but has moved 100 percent of his operation to retail, with a store on Haddon Avenue in Collingswood and an expanded presence at farmers markets. He started going to the markets last fall, dabbling his toes at Headhouse Square with great success, along with the Collingswood farmers' market. This year he's at New Hope twice a week, Fairmount, 25th and Spruce, Headhouse and Haddonfield. Mondon explained that his wholesale business suffered after 9/11 because he supplied airlines flying out of PHL, and the prices demanded by hotels have simply become unprofitable for him. So, the Loire Valley native has placed his bet on retail.

Returning to Fairmount are Earl Livengood and Sam Stoltzfus. Manning Livengood's this week was son Dwain, offering rhubarb, potatoes, spinach and a few other goodies (but none of the morels which graced Livengood's Reading Terminal Market stand the past two Saturdays, courtesy of forager Sam Consylman). Dwain also sells beef from his own small herd. Stoltzfus offers a similar range of produce in season, with the addition of Pennylvania Dutch baked goods. I'm not fond of that style of pies and cakes, but if you enjoy them and live in Fairmount, Sam's got them. 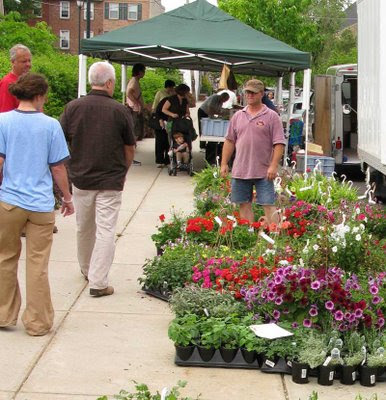 Another new vendor at Fairmount is Bill Weller, who stands in this photo among a colorful raft of hanging baskets, potted plants, seedlings. We won't see Bill's main crops until late spring, since he specializes in stone fruits (cherries, apricots, peaches, etc.), pome fruits (pears, apples), and berries. But it's obvious he also has a green thumb for some very hardly looking plants for the patio or porch. The hanging baskets sell very well back in Bloomsburg, where his farm is located, Bill says. The larger baskets might be a tough sell here, though not because they aren't beautiful and fairly priced. Most shoppers at Fairmount arrive on food, and the hanging baskets aren't easy to haul home when you're also carrying a bag or two of veggies.
Posted by Bob Libkind at 5:49 PM