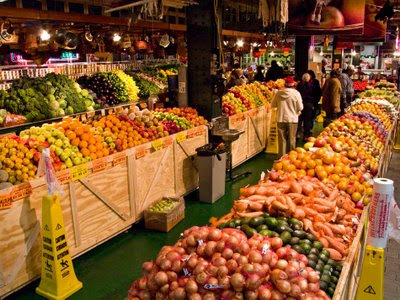 Hardly a year goes by and Iovine Brothers Produce decides its time to play musical chairs with its Reading Terminal Market displays. It keeps customers and staff on their toes.

The net result of this year's re-arrangement is a much more open feeling. That was achieved by using lower level bins for the first two aisles, mostly containing fruits and featured veggies. The racks of dried fruits, nuts and other items was moved against the window wall along Filbert Street. The standard size display cases form the row between the window wall and the bins. The mushroom refrigerated cases now joins the other coolers along the Filbert Street windows nearest the checkout. 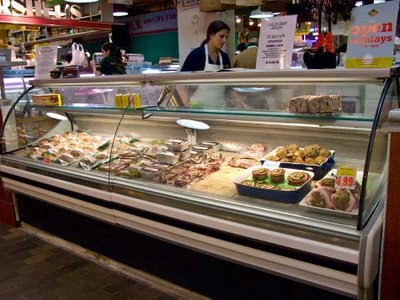 Another facelift could been seen at Harry Ochs, where a new case is home to prepared items (like stuffed flank steaks, stuffed pork chops, patés, etc.), making more room for raw meat in the main case. The big roast and steak subprimals, however, are now invisible in the walk-in refrigerator.

As of Saturday, Jonathan Best was not yet open, but it appeared that all the cases and shelving was in place, just waiting to be stocked. I would expect they'll make every effort to open in advance of Thanksgiving.

With Rick's Steaks now departed, most of that space now serves as a seating area.
Posted by Bob Libkind at 4:14 PM