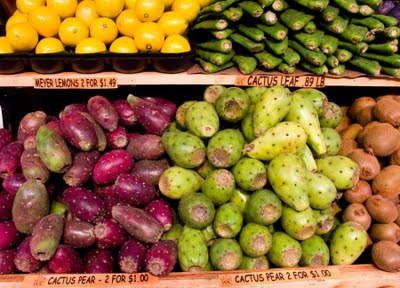 Iovine Brothers Produce at the Reading Terminal Market featured a nice selection of edibles from the prickly pear cactus plant. Both red and green cactus pears and cactus leaves (nopales) are shown here, along with Meyers lemons. the cactus pears were two for a buck, a very good price, and the nopales 89 cents pound.

Figs are still in season at Fair Foods. They're selling green figs gathered from a South Philly tree in egg cartons (six for $4). Plenty of apples and they've still got peaches.

Hershel's East Side Deli had plenty of cold brisket on hand for those who didn't want to cook their own for tonight's Rosh HaShana dinners. He also had sweet kugel, but not potato. Although they also sell hot brisket, the cold briskets allow the staff to slice it to whatever thickness you like.

In addition to bagels from New York's H&H, they also sell very good bialys. I buy them frozen then reheat for about 9 minutes in a 350-degree toaster oven. Plenty oniony and a great alternative to bagels.
Posted by Bob Libkind at 4:58 PM