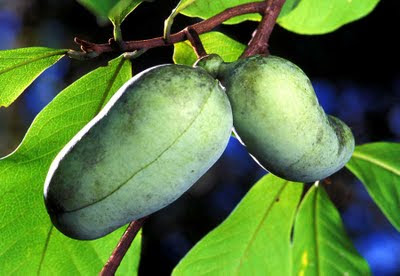 Ace gatherer Sam Consylman called to report that the paw paw season is underway, and the crop looks healthy.

The trees are laden with these custard apple-like fruits, and the rain predicted for tomorrow should put a lot on the ground. Sam forages for the paw paws by local creeks and aims to beat little critters to the fruit, who also enjoy its tropical flavor, even though it's native to North America's temperate climes. The fruits he gathered today are ripe, but he expects even more over the next few weeks.

(The photo, by the way, comes from the U.S. Department of Agriculture; photo by Scott Bauer.)

They'll be available tomorrow at Earl Livengood's stall at the Fairmount Farmers' Market, 22nd and Fairmount. Livengood's will also sell them Saturday at the Reading Terminal Market and the Bryn Mawr Farmers' Market, and again Tuesday afternoonn at the South & Passyunk venue. They'll also be available at the Fair Food Farmstand at the Reading Terminal Market, according to Sam.

If you need any recipes, Sam has them. He's usually at the South & Passyunk market on Tuesdays; just ask him and he'll pull out his book.

It's no coincidence that this weekend marks the annual Ohio Paw Paw Festival held outside of Athens. In addition to the usual paw paw puddings, pies, cakes and ice creams, expect to sample more savory dishes. There's also a paw paw beverage competition, including alcoholic beverages. Anyone for some Paw Paw Beer?
Posted by Bob Libkind at 5:34 PM