The Fair Food Farmstand opened for business today at its new location along the 12th Street side of the Reading Terminal Market. The space was last occupied by Rick's Steaks. The stall shut down at close of business Saturday to allow the staff to work over the weekend and through yesterday to prepare and move the stock.

With one reach-in refrigerator, two reach-in freezers, and an open shelf produce refrigerator, the new location offers plenty of additional cool capacity. That's in addition to the "arks" (the shelving which holds the produce at an angle), and tables painted with a milk-based paint, wood-finishing made from 40-year-old telephone poles, and chalkboard slate countertops. Although only one checkout was in operation today, there's a second checkout available to speed shoppers along. The west-facing windows brighten the space considerably, though additional lighting will be installed, according to Fair Food's Ann Karlen.

Once the old freezer and refrigerator are removed from the former stall, RTM will convert it to a seating area.

I've got some photos of the new stall below; just click on a photo to see a larger image. For a fuller documentation of the move, visit Messy and Picky blog, co-authored by Albert Yee, one of the Fair Food Farmstand's staffers (that's Albert in the bottom photo, putting some finishes touches onto one of the "arks"). 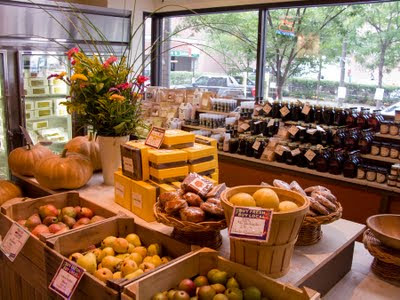 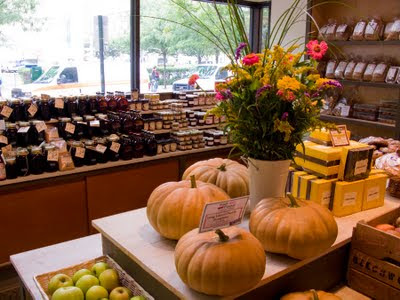 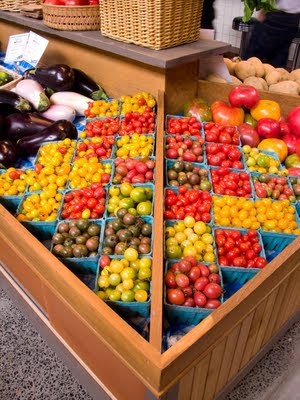 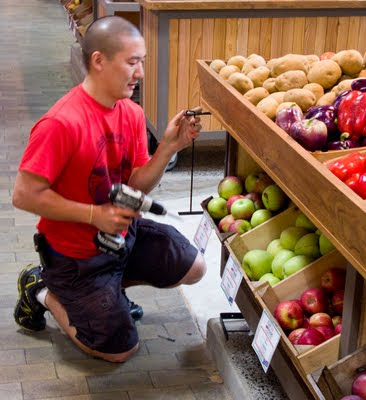