To my taste, the best potatos are the first fresh-dug spuds of spring. But the variety of potatoes that appeared at the Headhouse Square Farmers' Market today challenge that belief.

At North Star I found the Belgian Bintje variety, $2.50/pound. These are the classic potatoes used in the frites you find on streets throughout Brussels, though they are equally compatible with boiling or steaming. I intend to use them sautéd in either bacon or duck fat. I'll also try them in a fish chowder using leftover halibut (see previous post). 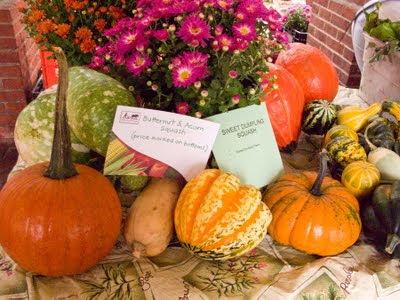 Noelle Margarum, doyenne of preserves and herbs at Headhouse, was selling Kennebecs and Potomac Reds at $2/quart. Her Kennebecs, however, were labelled "Kenny Backs". These potatoes undoubtedly originated in Kennbec County, Maine, though these flavorful all-purpose spuds are quite popular among Southeastern Pennsylvania farmers. Noelle also had a beautiful selection of winter squashes, as shown in this photo.

Blooming Glen also displayed Kennebecs, as well as Purple Vikings, Both were priced at $2/pound.

Beechwood Orchards still had raspberries, as well as the last of their peaches. In addition to apples and Asian pears, Beechwood displayed Seckel, Bosc and Bartlett pears ($5/quart) and concord grapes ($4 quart).

In yesterday's post I observed that local chestnuts, like those sold by Earl Livengood, tend to be smaller than the Italian imports we should start seeing a few weeks. Dave of Beechwood proves me wrong; his chestnuts were plump, big and blemish free, $3.50/quart. He expects to have them in future weeks and I intend to try them soon, even if I don't have an open fire available. 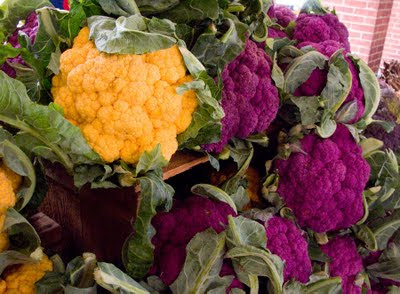 As usual, Tom Culton had an interesting array of produce, including white, orange and purple cauliflower (right). He also featured the Italian variety of pears I wrote about a few weeks ago, big yellow tomatoes, and huge baskets of concord grapes.

A few merchants didn't make it to Headhouse today, including Yoder Heirlooms and Patch of Star goat dairy. They are expected back next week.
Posted by Bob Libkind at 1:00 PM