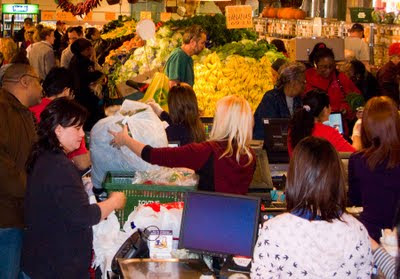 The aisles were crowded at Iovine Brother's Produce at the Reading Terminal Market this morning as shoppers sought veggies for their Thanksgiving tables. Once you managed to fight your way through the aisles, however, checkout was a snap: Jimmy and Vinnie Iovine rigged up a couple of additional registers, so there were an even dozen cashiers working.

Once reason for the crowds might have been the prices. White utility and Idaho potatoes, in five-pound bags, would set you back only $1.99. A 10-pound bag of non-Idaho russets were an even better deal, $2.99. Red potatoes were a relatively pricey, but still thrifty, $2.99 for a five-pound bag.

Onions were a good deal, too, at a buck for a two-pound bag (red or yellow). Three-pound bags of carrots were selling for two for $3. The green beans for your classic canned fried onion-topped casserole, however, were $1.99/pound, about twice as much as you'd pay at peak season. If you like some bay leaf in your stuffing, tray packs of fresh leaves were $1.99.

Among the non-Thanksgiving produce, limes have tripled in price, to 3 for $1. Hass avocados were two for $1.49.
Posted by Bob Libkind at 3:10 PM