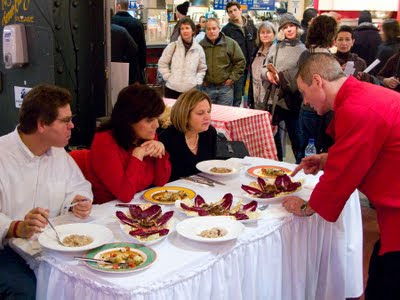 
Vena had more than a culinary interest in the proceedings, since he's the owner of John Vena, Inc., a wholesaler at the Philadelphia Produce Terminal who specializes in the import of Italian produce, including all the varieties of radicchio featured yesterday: the spidery Tardivo, the Rosso, and the Variegata di Castelfranco. Vena said the business was started by his grandfather in 1919 after arriving here from his native Gangchi, Sicility. The fourth generation has entered the business through his son, Daniel. (Among the other items he sells is Kiwi fruits; Italy is the world's largest producer of this item, normally associated with New Zealand. They were three for a buck yesterday at Iovine Brothers Produce.)

Joining Vena at the judge's table were Florio, who operates La Cucina at the Market, the cooking school located in the former market kitchen, and Riccardi, director of the Amerian-Italy Society of Philadelphia. 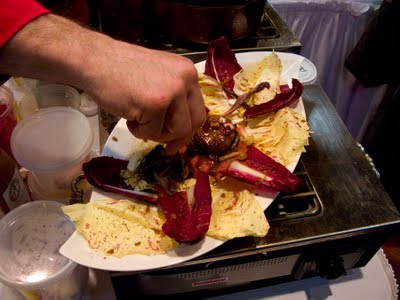 The winner's scallop dish (right) was served on a bed of the Variegata and was accompanied by a radicchio polenta with beets and goat cheese. In addition to his scallop dish, Rossi also offered a risotto. His restaurant is located 267 S. 19th.

Here are some more photos from the competition, part of a promotion to encourage Philadelphia chefs and home cooks to use these winter chickory-like veggies. 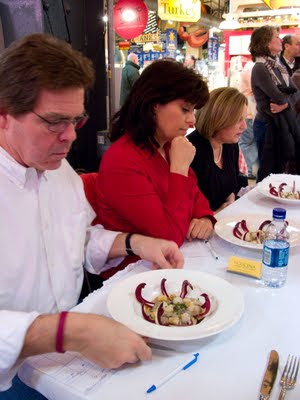 Vena, Florio and Franca contemplate a dish featuring the Tardivo. 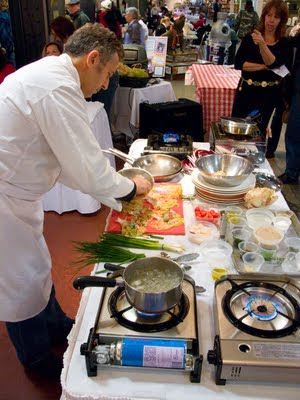 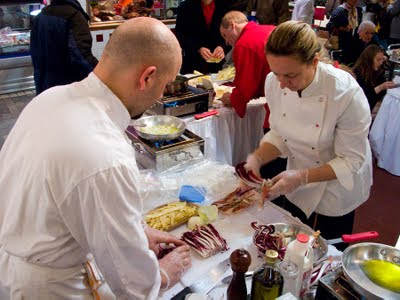 Spurio and her assistant prepare the Rosso for their fettucine. 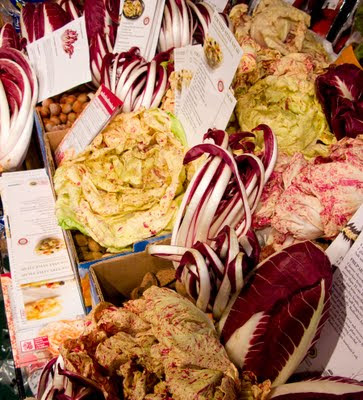 Here's the selection of radicchio displayed at Iovine''s, along with recipes. The Variegata ($11.99/pound) is the light, speckled heads in the foreground, the Treviso the Rosso di Treviso (a.k.a. "early", $7.99/pound) are the romaine-like heads on the right, the Tardivo ($17.99/pound) the spidery samples in the center. All versions come from the Veneto, the region around Venice.

The Variegata is primarily used raw in salads, but the recipe cards distributed at Iovine's included a Parmigiana version in which the leaves are briefly cooked in cream, then finished in the oven with Parmegiano Reggiano.
Posted by Bob Libkind at 2:42 PM