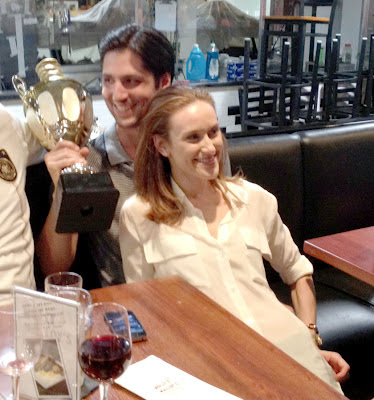 Joe Nicolosi and wife Christina were beaming at celebratory party on the night Adam Richman's Best Sandwich in American aired.

A few score of the Nicolosi family's friends joined them for the viewing party at Molly Malloy's within the Reading Terminal Market.

As has been noted by others, the lines have only gotten longer since DiNic's won the competition.

Of course, the finals seemed unfair to DiNic's competitors. I mean, did you really expect either of two chicken sandwiches to best pork? Even if one of them did have bacon?

I think the toughest round for DiNic's was the first, when they went up against Primanti's behemoth capicola and egg topped with french fries and, more importantly, Katz's corned beef-pastrami combo with slaw and Russian dressing, a combination that's always been one of my favs.  But as Richman showed throughout the series, he has a predilection for simple sandwiches with just enough ingredients to make it interesting while keeping everything in balance. And that's exactly what any of DiNic's sandwiches do, whether it's the roast pork, the brisket, the pulled pork, the roast beer or the meatballs.

Still, the chicken liver and tongue sandwiches from two of the other finalists are on my Sandwiches To Taste Before I Die list.
Posted by Bob Libkind at 12:23 PM