Downtown Cheese will take over much of the Piano Court and Nanee's Kitchen will switch to the vacant Coastal Cave spot this fall.

RTM General Manager Paul Steinke eventually hopes to lure a Latin American (but not Mexican) merchant to Nanee's spot. Farmer Steve Bowes, who occupies day tables in the Piano Court, will also be shifted as part of the shuffle.

All this means there will be a few less seats for lunchers in peak hours. But since Nanee's move to a larger space also requires them to add South Asian groceries in addition to their lunch items, it reinforces the market's mission to sell foods to be cooked and consumed at home. The product line will include spices and chutneys; let's also hope they include dried legumes and items like chick pea flour. 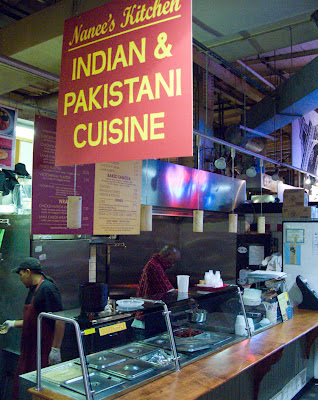 Jack Morgan, proprietor of Downtown Cheese, has had additional refrigerated display cases in storage since he had to close his second shop at the Ardmore Farmers' Market, where DiBruno's takes up his former space and a whole lot more, probably about a quarter of that venue's square footage. When Morgan moves, probably in November if all goes well, Downtown Cheese will have an L-shaped layout. He also believes being located across the aisle from Metropolitan Bakery and Blue Mountain Vineyards will be beneficial.

If Taste of Norway, which is temporarily set up as a  day stall in the Coastal Cave spot, plans to be a more permanent presence at the market, even as a day stall, the Nanee's takeover will require a move by them as well.