Of Cherries and Pedal-Powered Smoothies 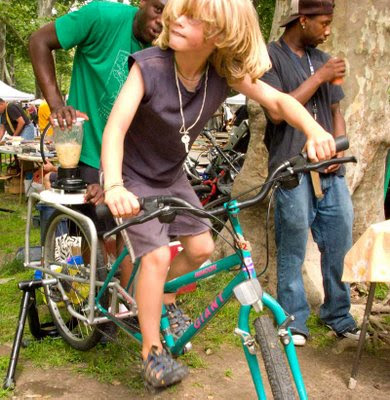 West Philly, thanks to the dominating presence of U of P, has long been Ithaca on the Schuykiill, i.e., a community where political and environmental correctness are firmly rooted. So it only makes sense that the Clark Park Farmers’ Market today would feature fruit smoothies produced in a pedal-powered blender. The smoothie stand was an adjunct to the produce stand operated by University City High School students.

Sweet cherries made their first appearance of the season at Clark Park. (Earlier in the day I stopped by Greensgrow, which pubicized they would have cherries. Alas, they either didn’t get the delivery or they were sold out 20 minutes after the market opened.)

At Clark Park the cherries were offered by Fahnestock Farms, $3 a pint for the Chelan variety. Alas, they weren’t particularly sweet or flavorful. Through further research on the web I learned that’s characteristic of the variety, which was developed in Washington State because they can be picked 10-14 days ahead of Bings. However, they do tend to retain their flavor in storage better than other cherries.

Peas in the hull were also available at Clark Park, including $2/quart baskets from Keystone Farm. Landisdale Farm offered quarts of string beans for $3.95, the first local beans I’ve seen this season.