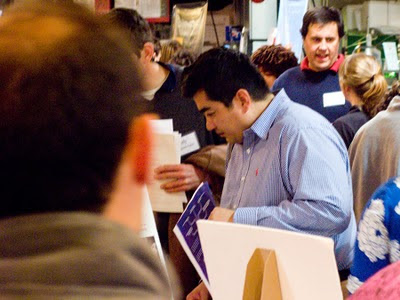 Fair Food held its seventh annual gathering of local producers and local buyers at the Reading Terminal Market Monday evening, bringing together buyers for about 175 restaurants (including Jose Garces, at right), food stores and institutional kitchens with about 50 different growers and makers of produce, meats, seafood, baked goods and other food items.

Another Fair Food staffer, Leticia Garcia, called it "the best year yet" for the annual event, which affords producers and buyers the opportunity to hook up, making it easier for farmers and producers to sell their goods, and local buyers, primarily restaurants, to find sources aimed at pleasing locavores.

The Garces Group was well represented, and not just with the eponymous Iron Chef.  The chief buyer for his Philadelphia operations, Adam DeLosso, and Robert Scully, manager of Village Whiskey and Tinto, were also roaming center court.

A number of representatives from Whole Foods could also be found making the rounds, tasting the offerings and discussing possibilities with suppliers. Lankenau and Cooper hospitals, LaSalle and the University of Pennsylvania were among the institutional buyers attending. Restaurants, which represented about 80 percent of the buyers attending, represented the full range of Philadelphia eateries, as well as chefs you would expect to support local food endeavors, like Mitch Prensky of Supper. 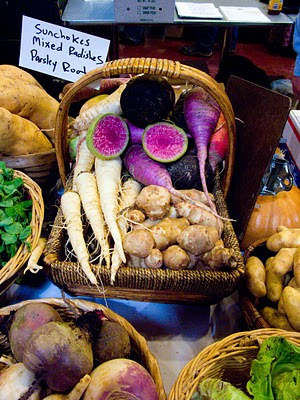 Among the locavore "wholesalers" attending were James DeMarsh of Common Market, which distributes local produce out of its Hunting Park Avenue warehouse, and Casey Specht and of Lancaster Farm Fresh Coop in Leola (whose produce is displayed at left). DeMarsh and Specht both agreed that the annual gathering gives them a chance to meet new potential customers and let them know how they can meet some of their supply needs.

Although institutional customers represent a small market for local growers and producers -- they've been most successful in supplying restaurants -- hospitals, schools and other institutions with food service responsibilities represent significant growth potential. Schools look to be a particularly important aspect of this market, as the U.S. Department of Agriculture and the White House (through the First Lady Michelle Obama's efforts) are beating the bushes for better nutrition, and more produce, in school food programs, according to Fair Food's Bentzel.
Posted by Bob Libkind at 3:54 PM