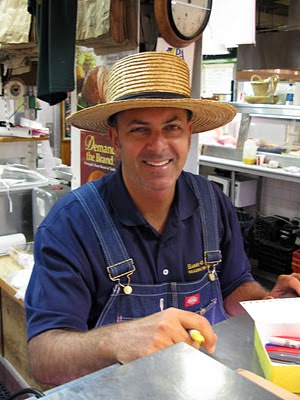 I had a chance to talk a bit about beef today with Nick Ochs of Harry G. Ochs & Sons (shown at right getting into the spirit -- and garb -- during the Pennsylania Dutch Festival at the Reading Terminal Market a few years ago).

The Ochs stall has long been known as a purveyor of prime beef, but given my conversation with Charlie Giunta a few days ago (see earlier post) I wanted to know a bit more about his beef.

Nick said he uses the same suppliers in Lancaster County as his dad Harry did. He exclusively buys USDA prime beef sides, which was a mild surprise to me, since I thought only some of his inventory was prime. The only time he orders choice, he said, is when a customer specifically requests it; an example he gave was someone who wanted ribs with a bit less fat on them.

His suppliers hang the sides he selects for four weeks, which is as long as most butchers and restaurants selling or serving dry aged beef. Even the meat that goes into his ground beef ages that long since it's all coming from the same sides and ground at the store.

A few customers like their beef for steak and roasts aged longer, and Nick obliges. Lynn Abraham, for example, goes for six weeks. He's even had a rare customer (a Manhattanite who forsook Lobel's for Ochs via mail order) who asked for eight weeks. Beyond eight weeks, says Nick, the beef becomes way too livery tasting. Occasionally, when his supply at the store is low, he might pull some sides from his suppliers' aging rooms at three weeks, but that's the exception, not the rule.

All of Nick's beef and poultry comes from Lancaster County. The lamb and pork come from farther afield.

Nick said his sales of prime dry aged beef have held up pretty well, even though they took a dip early in the recent recession. Five or six years ago a lot of market shoppers thought the lack of bright red color like they find in supermarket wet aged beef indicated poor quality. Today more shoppers are aware of prime beef and its characteristics, Nick said.
Posted by Bob Libkind at 3:48 PM