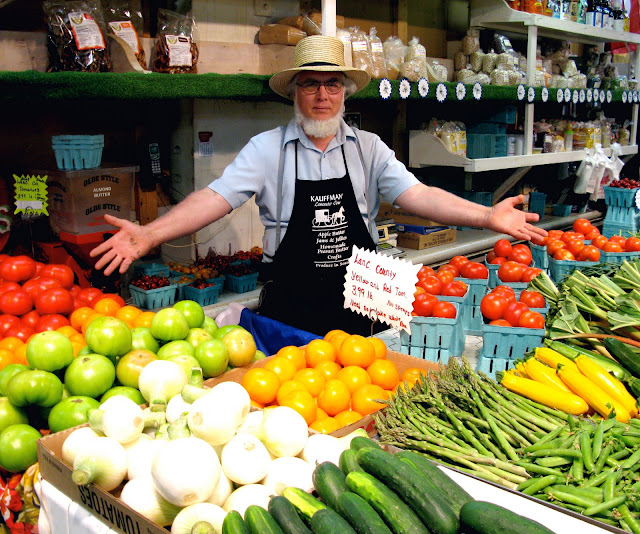 Kauffman's Lancaster County Produce has been a fixture at the Reading Terminal Market for 20 years. Benuel is among the handful of greengrocers who work directly with area farmers to bring their fruits and vegetables to the Reading Terminal Market. (The others are Iovine Brother's Produce and O.K. Lee, who have contracts with farmers to provide certain produce, Fair Food Farmstand and, to a lesser extent, L. Halteman.)

Ben says his customers have been asking when they'll start to see green things at his stall, which is now stocked with beans, canned goods, preserves and other packaged foods. If the weather cooperates he expects asparagus to show up in about three or four weeks.

Don't curse all that snow we had this winter. Ben says the thick layer of white stuff melted slowly, which was very good in prepping the soil for planting and for those crops already in the ground waiting to spring up with longer days and moderate weather.

Ben's been working in the market since the early 1980s when he helped out a fellow Amishman who operated a produce stand at the market, originally located where the Down Home Diner rules today. With the improvement of the market during convention center construction his predecessor moved to the seating area closest to Arch Street. A few years later he left the market, so Ben established his stall where Moyer's Pork Products of Blooming Glen was ensconced for a few decades. (You can still see the lettering for Moyer's stall at Ben's; we both lament the loss of Moyers and his superior hams, the best either of us have ever tasted.)

Although Ben obtains most of his produce from neighbors, he outs in a few crops himself, including green beans, peas and a few other vegetables.
Posted by Bob Libkind at 3:48 PM